Warner Brothers sent us a lovely parcel pre-Christmas, a stocking filled with three fabulous DVD’s and some divine Lindt chocolate (but that didn’t stick around very long!) 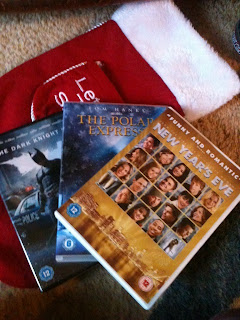 The Polar Express is a wonderful children’s film, and we have watched it daily since it arrived! The combination of a train on a journey to Father Christmas and all the adventure in between filled Boo (aged 4 1/2) with tremendous excitement and he sat silently throughout the film on numerous occasions! For me the voice of Tom Hanks really works well as the slightly grumpy train conductor!

New Years Eve is the ideal film if you like me will be enjoying the festivities of welcoming in a New Year at home! Starring such fabulous actors as De Niro and Kutcher I couldn’t wait to watch it! It is a feel good film, funny, sentimental and full of things which make you think about life differently. I have to confess, I did find the film a little long, but I also enjoyed it very much and even shed a tear or two. It comes with a UV copy, so can (and will!) be watched again while you’re out and about on a mobile device.

The Dark Knight Rises, Mr G was delighted to receive this as he loves Batman films, and as this is the last in the Nolan trilogy he was excited to see what would happen! Batman is now a fugitive, and the film is packed full of action which made the film – although over 2 1/2 hours long – fly by! The UV copy has proved popular and Mr G has already watched it on his phone while recovering from a nasty cold, while I watched films with the children instead.


Huge Thank You to Warner Brothers for sending us such a wonderful selection of Winter entertainment!

Do your children write thank you letters?