Boo has been pestering me for a while to do some more craft activities with him, we stopped for a while to encourage him to paint or colour but now it looks like we’re back on the making things front!

We bought some Polystyrene balls from The Range last week, a bag of about 6 was £1 and I thought we could create something with an Easter theme, although I really had no idea quite what! I eventually decided we’d make Easter chicks, I was feeling ambitious!

So, we painted the balls bright yellow with poster paint, we discovered that washing liquid lids worked well as stands while painting!

While waiting for them to dry we found some pipe cleaners, googly eyes and feathers which had been hiding in the bottom of the crafting box! Carefully applying some PVA glue to the googly eyes Boo stuck them on. With a bit of help from me we made a beak from an orange pipe cleaner – the good thing about using polystyrene balls is no glue was needed for attaching anything which can be pushed into it! We used colourful feathers to make wings and a tail, we just pushed the feathers in to the ball, although make sure you select feathers with a rigid bit at the end or they really won’t go in easily!! 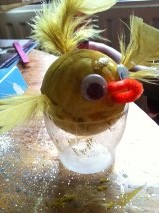 This was Boo’s first attempt, he said it looked a bit like an Angry Bird (which Daddy has on his phone!) and so decided he wanted to make some more as an Easter present for Daddy! He gave them all slightly different eyes, and variations on beaks and feather arrangements, but I think they’ve come out really well! 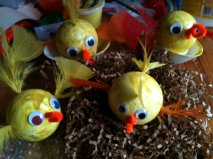 We are now trying to make an Easter nest for the chicks to live in, brown paper sizzles from a hamper will I hope glue together to create it! I’ll update if we have any success!


Wishing all our readers a very Happy Easter!