When we were asked if we’d like a copy of Argo on DVD to review, I could barely contain my excitement. I was really keen to see the film, but through months of chicken pox and every other bug going around the children, we hadn’t found time to take ourselves on a date to the cinema, so getting a chance to review the DVD was perfect! 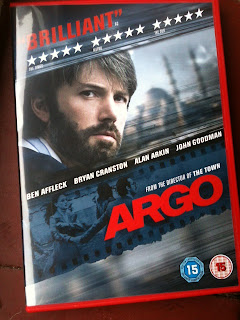 I didn’t really know what to expect of the film, I’d read reviews and noted the incredible amount of awards won, these are the awards Argo won:

Award winning films aren’t always films I love, so I tried to ignore the awards and just watch the film – unbiased. Well, what can I say? I was not disappointed! The film, based on a true story kept me on the edge of my seat and I had many moments where I was so captivated in the action and felt such a part of the film that by the end I was in need of a strong cup of tea! I don’t want to give away any storyline details just in case anyone hasn’t yet seen the film (if you haven’t YOU MUST!) but what I will say is it is finally balanced with elements of comedy and drama mixed in and it is intense! The storyline seems so ridiculous, that you do have to remind yourself that this is based on a true story but then I’ve always thought truth is stranger than fiction! I really enjoyed Argo, and have fallen in love with Ben Affleck, well, (his acting!) all over again! I will definitely be watching it again!


Many Thanks to Warner Bros. for sending us a copy of Argo to review!