Boo was delighted to receive a fabulous parcel of goodies from Warner Bros, just in time for Half Term and Halloween! They included 4 dvd’s including the spooky Tom and Jerry Trick or Treat, Lego Hero Factory Savage Planet, Ben 10 Destroy all Aliens and Scooby-Doo Big Top! 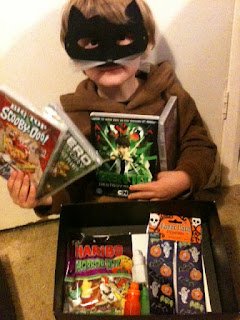 Boo decided we should watch Lego Hero Factory Savage Planet first and we settled down to watch it. The story is set around Aldous Witch who has transformed into an evil witch doctor and has transformed a once beautiful planet into a deadly wasteland which is destroying everything including the Heroes..will they survive?! This is an exciting action packed animated DVD, which we both enjoyed watching and I think will be watched many more times over the next few years!

Tom and Jerry Tricks and Treats  has already been watched several times since it arrived! There is something about Tom and Jerry that appeals to both boys (and me!) this dvd has magic, a zombie Jerry and lots more Tom and Jerry antics! It’s good spooky fun without being frightening! Boo says ‘Children will be amazed by all the fun Tom and Jerry have!’

Big Top! Scooby Doo
This is a 75minute adventure involving a werewolf who is causing trouble for a circus, the Scooby Doo team go undercover as circus perfomers (lots of fun!) to discover what’s going on only to be confronted with an increasing amount of werewolves! We really enjoyed this, Boo wasn’t keen on the werewolves, but loved seeing the gang solve the mystery and has already asked if we can play it when his friend comes to visit at the weekend! This is a title which comes with Ultra Violet, and so we can watch it when and where we want!

Ben 10 Destroy all Aliens  was definitely Boo’s favourite, he was gripped by the story line and sat silently watching throughout the whole film (with the exception of the odd “oh!!” exclamation!). I wouldn’t say he is a Ben 10 fan, he’s seen a few episodes but isn’t to worried either way, but thinks the film is fabulous and has already asked if we can put the UV code (included) in so he can watch it on my phone next time we’re out and about! The plot involves Ben being bullied at school and deciding to go to the Total alien immersion training programme, little does he know total immersion means never being human again.. a cross-world battle with lots of excitement!

A huge thank you to Warner Bros for sending us this lovely hamper of Halloween goodies!