Ok so I missed the 12month update, I don’t have beautifully staged photos of my daughter’s first birthday and infact I’m not sure we took a photo of her at all..Oh, yes we did take her photo, she was scowling as it was raining and I was attempting to hold her while we peered at a retro fairground ride in the Dordogne, she was less than impressed. I had a mild case of guilt that I hadn’t staged photos, or a cake smash (actually, I didn’t even make a cake – it’s hard to bake a cake when you’re on holiday in a tent) or hosted multiple parties aimed at a) baby friends b) family c) My friends (damn! i should have had this one!). But then I realised that I have lots of precious memories of her 1st birthday, and while the bells and whistles approach is lovely, no parent should feel guilty for not living up to the expectations of what parents “should” do which I think sometimes social media creates. I digress. 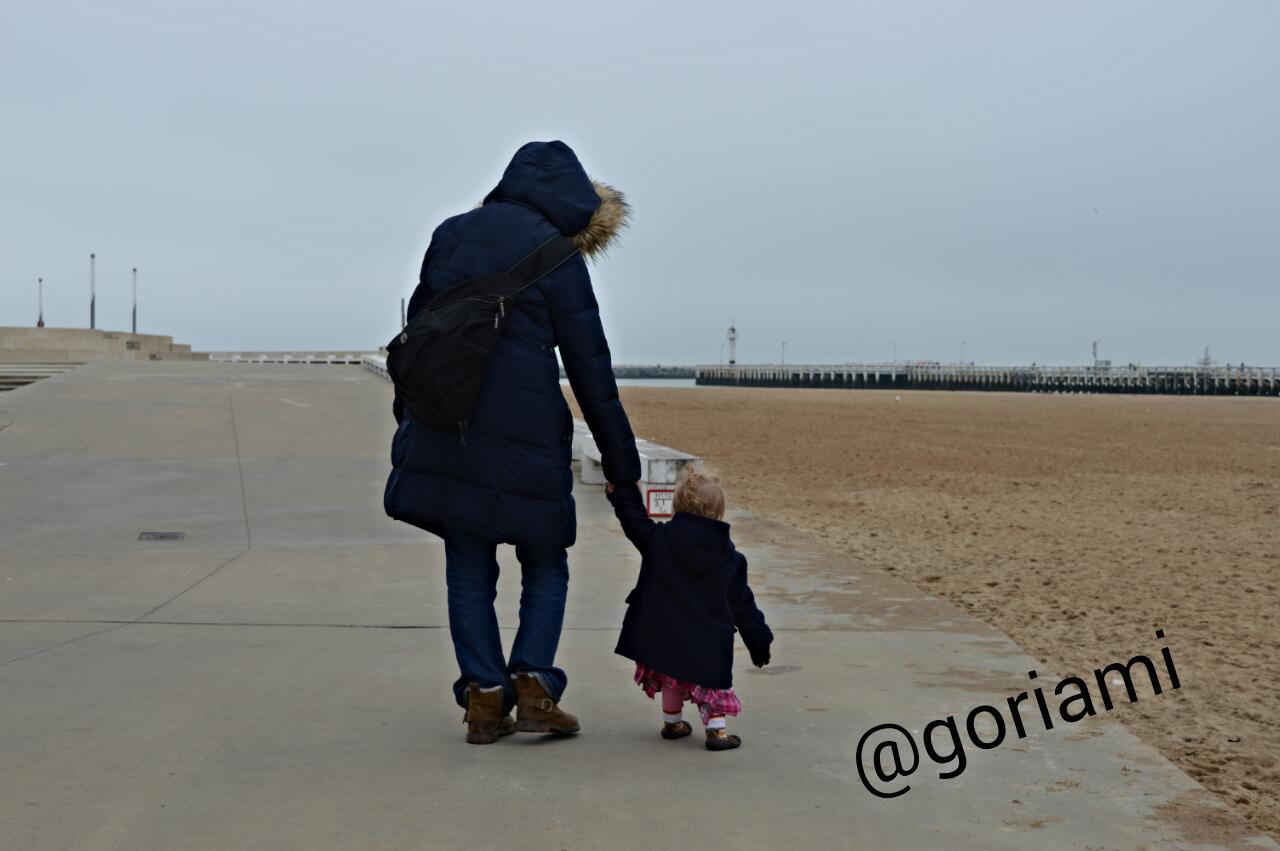 So, what can Yo do aged 13months? The most major milestone is she has started to walk!! She had been showing signs of thinking about walking for a long time before she actually did. She did lots of leg strengthening squats (I wish I was as proficient as her on those!) and stood up holding on to furniture edging her way along using the same leg each time to take the “step”. She had her first “proper” walk holding my hand out and about while we were in Oostende – see the image above.

Progression to walking on her own has been rapid, and she now follows me about the house at full speed often calling “Mama” or “Mamere” as I have started to be called. Language wise Yo makes a lot of sounds, her words are still limited to maybe 5? But she is very keen to make herself understood, so she uses a lot of sounds and facial expressions to get her point across.

Food, she’s started to be a slightly fussy eater, anything green gets thrown to the side of the plate while she eats everything else first. She will then offer the plate to us and babble, so I’ve started to reply that she needs to finish her greens. There is usually a bit of debate, but she tends to then eat it anyway, so it was worth the “negotiation”.

Teeth, she has her molars through and yes they were horrible as they came through, she was a screaming (dribbling!) banshee until they were out! She loves brushing her teeth, finding it highly amusing which is lovely as I never liked having my teeth brushed and as a result have several fillings now I’m in adulthood, I hope she takes better care of her teeth than I have!

How much do you know about Strictly Come Dancing?