One of our favourite activities is putting on some music and having a dance! Boo is getting quite interested in singing the lyrics, so I now have to exercise caution on what music I’m playing after he started to sing something quite colourful at my parents..in my defence I’d never noticed what the lyrics were until he started to sing them.. So I’ve been on the look out for suitable toddler music, which is age appropriate but still ‘cool’.

We received a copy of the new Justin Fletcher Hands Up album on CD to review, and I wondered what Boo would think of it! As soon as we put it on, Boo was delighted, I think the very fact it was a CD especially for him helped fuel his excitement! The CD is a collection of songs for young children, some which Boo was very familiar with e.g. Heads Shoulders Knees and Toes and some which he’d never heard e.g. Nellie the Elephant. The songs are all accompanied by pop backing, so they’re more appealing than the more traditional versions to have playing around the house while you’re hoovering and certainly hold the attention of my rather lively 3year old! 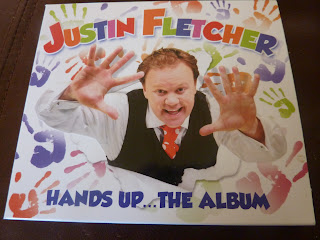 I confess sometimes I find it a bit difficult to engage both boys in an activity when they’re full of energy, and that’s normally when chaos occurs! But I have discovered a secret weapon in the form of Justin’s The Hokey Cokey, Boo is learning the moves and I’m helping E with them, much to both their and my delight! If you’re worried that your little ones will get a bit over excited fear not..there is a superb lullaby at the end of the album which really soothes and even Boo lays down on the rug while listening to it!

I would thoroughly recommend Justin Fletcher Hands Up the Album, to anyone wanting a great selection of traditional children’s songs in a modern form!