Over the weekend, I celebrated my Birthday, I realised I’m getting old as I was more intent on the children being happy then anything else! I didn’t really mind what I did or didn’t do as long as I had two happy bambinos!

Naively, I thought that by age 3, Boo would be easier to entertain. In fact I have decided age 3 is worse than age 2 was, as distraction no longer works! At least last year when he demanded to get out of the car while we were in the lion enclosure of a safari park I managed to distract him by getting him to look at the keeper in his 4X4.. This year I had to use ever ounce of my power of negotiation in the Lion and the Wolf enclosure as Boo was adamant, he was getting out.. It sounds silly writing it now, but I suddenly felt paranoia flowing through me, what if I hadn’t remember to put the child lock on the doors and he got out the car?!

I must admit I was relieved to get into the relative safety of the giraffes, who strangely quietened Boo down and caused him to say  with his nose squashed against the glass ‘I wonder what they are thinking’. It’s a good point, and something that had never crossed my mind before, what are those beautiful creatures thinking as they are surrounded by people sat in cars snapping photos like paparazzi! 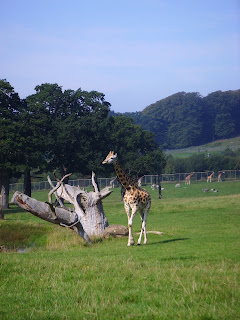 Mr G treated us to tea, and Boo demanded the biggest cake he could see, while Elvis just cooed and tried to grab the tablecloth – at least my reactions are quicker these days. When the biggest cake had to be divided into two – (I am trying to lose my baby weight and it isn’t a rapid process!) – Boo decided to express his distaste by shouting ‘No!! That’s mine!! Mummy your not having any!’ at the top of his voice, much to the displeasure of the group of senior ladies from Germany at the next table. To these ladies, should they be reading, believe it or not, I didn’t particularly enjoy the shrill tone of his shrieking either. As I’m sure you could see, it was either let him shriek while I held onto the plate for dear life, or risk the cake actually flying across to join you on your table.

Of course Elvis slept all the way home in the car, so when we were ready to go to bed, he was wide awake and wanting to play. While Boo was crying saying he was tired and needed E to be quiet so he could sleep. I finally climbed into bed at  gone 2am, only to be woken by a lively Boo at 5am, so forgive me if my writing is slightly erratic! When will I learn, I’m not sure I ever will!

Back to School Treats with Whole Earth Foods