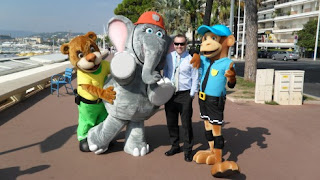 The creator of City of Friends – Carl Christian pictured between characters Max and Elphie.

Carl Christian: As a child I dreamt of one day becoming a Police Officer in my home country – Norway. In 1998 I graduated from Police College and I was very proud! I worked in various departments, and learnt that to solve cases we needed to work together with the other emergency services and work as a team. Through working as a team we often built great friendships, and it was this that inspired me with the City of Friends. I began telling my son stories at bedtime about my experiences and my son was fascinated quickly learning which emergency service would be needed in an emergency scenario. The City of Friends developed from there.


I started to write the stories down, and even sketch what I thought the characters would look like. One day I was asked to read the stories I had created at my sons nursery, and the children were as fascinated as my son! The idea to turn it into a tv show came while I was watching childrens tv! So I began speaking to Norwegian broadcasters and the Ministers of Culture and Art!

Carl Christian: I now have 3 sons, and they all love the adventures of the City of Friends Characters!

Carl Christian: I wanted to teach children about friendship and teamwork. Taking care of the people around you is so important!


Exciting things are happening during 2012 with the City of Friends, including a fabulous music CD!


DISCLAIMER: This is not a sponsored post, we have included this interview as we are fans of the City of Friends.